“Former Barnet Captain Andy Yiadom has signed for Barnsley during the Summer on a free transfer and a two year contract” ran the headlines in May 2016. Andy has been a influential part of the new Barnet FC at The Hive and of course a major contributor to our Conference Championship win in 2015. 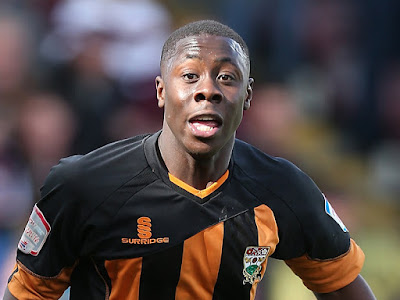 Andy, of Ghananian parentage, was born in 1991 in Holloway and began his career as a youth at Watford followed by spells at Hayes and Yeading and Braintree Town in the Conference Premier before Lawrie Sanchez saw his potential in January 2012. Andy made his debut for the Bees as a substitute at Underhill in the 2-1 defeat in February against Shrewsbury Town in the following Bees line up
Brill – Dennehy, Downing, Hajrovic, Saville (Byrne) – Hughes (Yiadom), Obita, Kamdjo (Mustoe), Deering – Holmes, McLeod.
With the arrival of new Manager Edgar Davids, Andy soon blossomed into a speedy right sided midfielder, with that never let you down, 100% effort attitude. He will always be part of Barnet Football Club folklore playing in the final ever game at Underhill against Wycombe Wanderers.
By 2013-14, and the club now at their new home The Hive, Andy had developed into a natural right full back, his bustling over lapping runs a feature of Martin Allen's style although he could play virtually anywhere and look comfortable. That season consolidated the clubs' and Andy's position before his outstanding contribution to the return to the Football League campaign a year later. Andy only missed 5 league games all season. Reward came by way of his selection by former Bees manager Paul Fairclough for the England C squad. He won 3 international caps scoring twice.
In 2015 Andy was made club Captain at Barnet marshalling another solid season, this time in the Football League, where he attracted much interest and was watched regularly by Scouts.
There was always going to come a time when superb young talent such as this has to move on and Andy's time had come coupled with the fact that his contact would expire in June. Martin Allen described him “He was Player of the Year for England C last season; the best player in the Conference by a country mile and he is a top-quality.”
Bees 2015-16 Player of the Year Jamie Stephens said “Yids is an exemplary professional and a fantastic leader, highly respected amongst the lads. He is the source of most of the jokes too! I am looking forward to seeing him play in the Championship as he is a great example of what can be achieved with the right attitude and dedication.”
In his time at Barnet Andy made 181 appearances scoring 15 goals – the club and supporters I know will join me in wishing him good health, happiness and hope that he will have a successful career so we can boast that “we saw him before you!”
Posted by Reckless on Sunday, August 07, 2016
Email ThisBlogThis!Share to TwitterShare to FacebookShare to Pinterest