Key Personnel
Keith Curle is the current Manger at Brunton Park and has been at the helm since September 2014. Defender Keith was capped three times as a full England International and played close to 800 domestic games in a 24 year career notably with Manchester City, Wolverhampton Wanders, Bristol City and Wimbledon. He has had previous managerial experience with Torquay Utd, Notts County, Chester City and Mansfield Town. 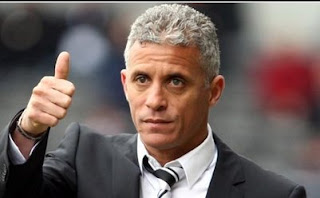 Brief Directions by Road
It's a long way to Carlisle but taking the M1 and onto the M6 is for starters. The ground is very easy to find. Leave the M6 at junction 43 and turn off onto the A69 signposted Carlisle. Follow this road through 2 sets of traffic lights (Warwick Road) and after about a mile you will see Brunton Park on your right.

Car Parking
There are no parking problems at Carlisle as there is a large car park close to the away turnstiles. Continue past the ground for approx. 200 yards and turn right onto Victoria Place and turn first right onto St Aidans Road. £2.50 the Charge.

Directions by Train
A Virgin Train from London Euston takes approx. 4 hours to Carlisle on route to Glasgow and Edinburgh. Carlisle station is approx. a mile and a half walk from the ground. Come out of the station and cross Bothchergate and into the Crescent and then into Warwick Road, which is the A69. Buses numbers 70, 74 and 685 all run along Warwick Road towards the ground.

Eating and Drinking Locally
There is a pub called the Beehive which is only 100 yards from the ground but is very popular with the locals before the game although away fans are admitted . The local Carlisle Rugby Club bar is open to away fans and comes recommended from a reliable source and a great pint of Theakstons.
Those travelling by train have the Reckless Recommendation of the superb Howard Arms on Lowther Street for eating and drinking. I ordered a Chicken Curry during one visit and it turned up enough for three cooked to perfection with old style chips and rice and salad all served separately as requested......we got a cab to the ground! 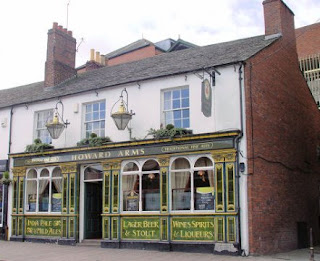 Inside the ground you will find the Brunton Pastie (which is slightly different to normal pasties and pies) and well worth a taster especially after travelling all that way. The nearest chippy is a fair walk away along the Warwick Road and for you heathens the nearest McDonalds is hopefully in Whitehaven!

Ground Description
Brunton Park is an imposing venue. The main stand is a strange looking affair with the centre section originally constructed in 1953 flanked by wing sections added in 1974. The extensions were opened for the start of the clubs season in the top flight (i.e. Division 1 before the Premiership). It has a large open paddock in front. The home terrace is the Warwick Road End adorned with a splendid multi span roof. Opposite is the Pioneer Stand and is the most recent addition to the ground. Our away contingent will be allocated one corner of this area accessible from its northern entrance via turnstiles 17-21 The open Petterill Terrace completes the picture 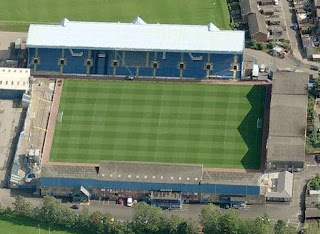 Previous Meetings and Memories
Our last visit in September 2015 finished 3-2 to the Cumbrians. Bira Dembele and Michael Gash were on the scoresheet for the Bees.
August 2005 was special featuring a brilliant 3-1 win thanks to goals from Giuliano Grazioli, Nicky Bailey and Dean Sinclair. 9,215 fans were present the previous season to witness another outsatnding 3-1 victory for the Bees. An Ian Hendon penalty an own goal from Kevin Gray and a bullet header from Dwane Lee sealed the win. The return game at Underhill was the night that the Conference Trophy was presented. The game itself finished 1-1 and witnessed that Graz overhead goal....... hold on why am I telling you about something that should be embedded in your memories for ever?
I have travelled some miles in following Barnet over the years but the journey to Carlisle is the second worse I have ever experienced. (Barrow-In Furness in the ultimate). However April 1992, our first season in the league, saw Duncan Horton, Harry Willis and Mark Carter all score for the Bees in a brilliant display of attacking football. We returned the following season and silenced a big crowd with another great display and a goal from Brian Stein won it.


Celebrity Watch
A whole host of famous celebs hail from Carlisle and its surrounding area including Poet William Wordsworth, DJ John Peel (RIP), heavy breathing TV presenter Melvin Bragg, the chap who is married to TV’s Judy Finnigan, Eddie ‘where’s your tie son? 'Stobart, funny man Bob Mortimore and one member of boy band 911. Rudolph Hess, the famous Nazi war criminal who attempted a few peace keeping missions throughout Britain in 1938, once stayed overnight in Carlisle Castle. A Bed & Breakfast room with trouser press and a shared bath was 1/- 8d (One shilling and eightpence to you or about 8p) per night but the room had to be vacated by 10.00am.

The Cumbrians most famous fan is sultry Heaven on Earth American singer Belinda Carlisle who changed her name from Kurczeski in honour of the club when they briefly topped the old 1st division table in early season 1974/5 after beating Chelsea at Stamford Bridge.

Posted by Reckless on Sunday, January 22, 2017
Email ThisBlogThis!Share to TwitterShare to FacebookShare to Pinterest