Barnet’s inaugural season in the Football League in 1991-92 had been exhilarating and the final finish position of 7th frankly could have been improved on if only Barry Fry had perhaps played one or sometimes even two more defenders in a game – but that was his style, entertainment. It was however infectious.
Blackpool had finished 4th therefore the teams were drawn together in the two leg play off system. Earlier in the season league points had been shared with Barnet winning 3-0 at Underhill and Blackpool 4-2 at Bloomfield Road.

After the first leg on Sunday 10th May the majority of the 5,629 Underhill crowd were wandering home wondering how on earth the tie was not all over and dusted. Barnet even without midfield general Kenny Lowe, created chance after chance and not just from the front pairing of Mark Carter and Gary Bull as Duncan Horton, Carl Hoddle and Jonathan Hunt all had clear opportunities. The deadlock was broken, and we hoped then that the floodgates would open, after 29 minutes. Steve McIlhargey parried Hoddle’s shot but the loose ball was gobbled up by Carter for 1-0.


Paul Showler had McIlhargey sprawling across his goal and even David Howell had an effort cleared on the line – Owsy has always said he didn't like running back up the hill after a foray forward!
The second half was much the same one way traffic – Mark Carter could have had a hat full if not for more good work by McIlhargey and the positioning of cross bar. Unbelievably Carter's brilliant lob rebounded from the bar and back into the grateful keepers hands. Minutes later a Geoff Cooper cross was met with a downward header by Carter but the ball agonisingly bounced inches over the bar.
The rather tyrant-like Barnet Chairman of the time Stan Flashman, as legend has it, stormed into the dressing room branded the whole team as useless and sacked Fry on the spot! Barry of course was reinstated just in time for the second leg. (I smile as I type).

Four days later backed by a very boisterous bunch of Bees supporters in the 7,588 attendance, many who had spent a rather reckless time at the seaside, the team bravely fended off the expected onslaught by Blackpool.
Steve McIlhargey was a hero for the Seasiders again pulling of a wonderful stop to deny Roger Willis before Groves levelled the tie with a free header from a corner two minutes before the interval. Mick Bodley was then very harshly adjudged to have handled in the area – the video replay to this day confirms this as cruel. Striker Andy Garner, who missed the first leg, made no mistake.
Barnet piled forward in the final minutes looking for the equaliser the best chance coming from Gary Poole's 25 yard freekick which looked goal bound before Carter, with back to goal attempted to deflect the ball but it sailed just over the bar.
No visit to Wembley after 20 years for the Bees but that team would have graced the old Twin Towers turf. That is an argument I will defend forever. 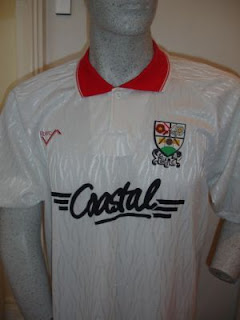 Posted by Reckless on Sunday, February 26, 2017
Email ThisBlogThis!Share to TwitterShare to FacebookShare to Pinterest