Chris Kinnear is the current manager at Dover and he of course is a legend at Barnet if only because he is the Number 3 in the Bees terrace chant The 12 Days of Christmas! He was at Underhill between 1982-84 joining us from Maidstone after starting at West Ham United.
He first became manager here in 1995 and had considerable success over a decade winning three Southern League titles. After a spell as manager at Margate he returned to the Crabble in January 2014.
Brief Directions by Road
From the M25 after crossing the QE Bridge (and not forgetting the Dart Charge) join the M2 and head towards Dover. Exit M2 & join A2, still heading towards Dover. At the end of the A2 you will come to a large roundabout (McDonald’s Drive Thru on your left but resist it please). Take the 4th exit down Whitfield Hill towards River. At the bottom of the hill, take the 1st exit at the roundabout and continue on this road. At the traffic lights, turn sharp right into River. Follow the road downhill and under the railway bridge. The road will start to go up hill again. Towards the top of the hill turn left into Crabble Athletic Ground.

There is free parking at the rugby ground near to the entrance of the Crabble “complex”. Street parking is plentiful although be prepared for an unsympathetic walk up the steep hill to the Crabble itself.

There is a choice of two stations for Dover Athletic FC, Kearsney (the nearest and about 20 minutes walk) and Dover Priory (about 2 miles away). Kearsney is on the London Victoria line via Canterbury and is less frequent than the London St Pancras via Ashford train which travels directly to Dover Priory and takes about an hour. Taxis are really the best option as both stations are a fair walk from the ground. Why not get there early and explore and take in a few hostelries on the way (please see below)

Eating and Drinking Locally
The Social club welcomes home and away fans. For just a beer The Cricketers is the pub closest to the Crabble and has been a reliable pre match watering hole for years. Big beer garden and real ales. Dover Priory Station offers the chance to visit the Golden Lion on Priory Street which comes recommended. The Eight Bells is the local Wetherspoons outlet closest to this station on Cannon Street.
If alighting from Kearsney Station try the Railway Bell where you can be sure of a good food as well as a sound pint.
As ever I leave the best to last as the “Reckless Recommendation” is The Coastguard Bar & Restaurant (The Bay, St Margaret's Bay, Dover, CT15 6DY) literally on the beach in the village St Margaret's which is about a mile and half to the west of Dover. Find the A258 Deal to Dover road turning into Station Road signposted St Margaret's. Go through the village and at the steep hill the Coastguard is clearly signposted and straightforward to find. Not the cheapest place in the world I grant you but it comes highly recommended from my sources.

Ground Description
The low main stand with its four rows of seats, which occupies the whole of one side of the ground, was built in 1951. Both the River and Town End terraces are covered with identical open box like structures while the fourth side accommodates the social club, some open terrace areas and the smart Family Stand built in 2016 which sits at the south end of the ground between the halfway line and the corner flag. There appears to be a caravan perched on the roof of the main stand – don’t worry it is the quaint Directors Lounge! Such character is rapidly disappearing from our football grounds so treasure the image.
If segregation is employed we will be allocated the Dover Street End Terrace. 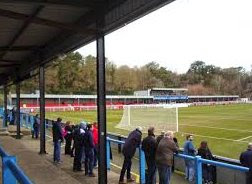 Our Last Meeting & Memories
Our last meeting was in December 2014, when a brace from Luke Gambin and a Louisa Vila Lopez goal won the game 3-0.

We have battled both versions of Dover and in fact the original club was a very frequent opponent during the 1960’s and 1970’s. It doesn’t get much better as an 11 year old watching your team thrash another team away from home 0-6. That game in 1971-2 season - decorated with goals by Lou Adams (3), Paddy Powell (2) and Les Eason - was the start of our journey to Wembley and ultimately the FA Trophy final defeat by Stafford Rangers.

We wouldn't be having scoring problems today with that little trio believe me.

Our successful run up to winning the Club Call Cup in 1989 included a fine 5-1 victory over Dover at Underhill. That game featured goals from Nicky Ironton, Paul Shinners, David Sansom and Nicky Evans – who got two of course.
The FA Trophy tie at Underhill in January 2004 was memorable for completely different reasons. Geoff Pitcher (2) and Lee Roache goals had given the Bees a narrow 3-2 victory in the 3rd Round and supporters waited with baited breath for the draw for the next round dreaming perhaps of trip to Villa Park for the final. However it came to pass that we had fielded an ineligible (cup-tied) player for the first half of the game in one Adam Campion. Campion had represented Aylesbury Utd in a previous round versus Banstead but had omitted to tell the club. Bees Chairman Tony Kleanthous was quoted as saying “We went straight to the FA, holding our hands up and we did try and do the right and honest thing but honesty doesn't count for much in this industry”.
Overnight Stay Factor
An 8/10 for this one and my little band of brothers are popping over the Channel of Friday for an overnight stay, pick up a little booze and return Saturday morning for the game – Wine, cheese and chocolate and perhaps a French maid outfit for the other half – it works for me!

Celebrity Watch
A few Ex Bees have left their mark at the Crabble in the past. Giuliano Grazioli made his considerable experience count towards the teams’ success quite recently. ‘Don’t Flinch’ Tony Lynch spent a couple of spells on loan here and became quite a cult hero. Talking of heroes Barry Little gained the respect of the Dover locals before his tragic death from a brain tumour in 1994. Chris Kinnear as already mentioned was a lynch pin in a couple of Barry Fry’s early Underhill squads and powerful midfielder Robert Codner had a brief spell here too before becoming a Football Agent. Andy Hessenthaler was manager from 2007-10 and oh yeah Ian Hendon popped in for cuppa once! Cricketing legend Wally Hammond was born here as was referee David Elleray.