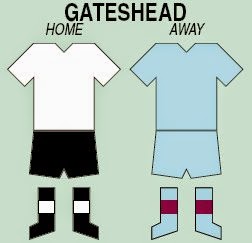 Nickname
The Tynesiders or The Heed
Official Website
http://www.gateshead-fc.com

Key Personnel
Manager Gary Mills had a prestigious playing career winning the European Cup with Nottm Forest in 1980. He also starred for Notts County and Leicester City. He has also had considerable managerial experience mainly in Non League winning promotion to the Football League plus the FA Trophy with York City in 2012 and the Conference North Championship with Tamworth in 2009. He joined Gateshead in September 2013.

Brief Directions by Road
Easy peasy lemon sqeezy, from the A1(M) exit onto the A194(M) just North of Washington Services, which is a very long way. Follow this road until the junction with the A184. Turn left towards Newcastle/Gateshead where after approx three miles you will see the stadium to your right.
Car Parking
There are numerous pay and display car parks in and around the stadium – basically take your pick. Street parking is unrestricted too.
Directions by Train
The Stadium is accessible via the very efficient Tyne and Wear Metro link from Newcastle Central. A mid morning train from Kings Cross to Newcastle will take around 3 hours
Coach Travel
Supporters Coach will leave from the Hive at 7.00am and cost is £35.00.
Earlier pick up points starting from 6.00am are Potters Bar, Barnet (3 separate points), Whetstone and Edgware. Call 0208 381 3800 for details.
Eating and Drinking Locally
According to my spies the café/bar at the ground is away friendly! Another spy informs me that most Gateshead fans drink in the Nags Head on Gateshead High Street and we will be made welcome to have a few beers there. The Schooner is the pub that many I have spoken to mention as it overlooks the river and also welcomes away fans. It can be found on South Shore Road, Gateshead, NE8 3AF. But then there is honestly very little else unless you hit the town centre.
For drivers arriving early the Reckless Recommendation is:
The Malting House Carlisle Street, Felling, Gateshead NE10 0HQ. An old haunt of Gazza and Chris Waddle I am informed by one of my spies. Great beers and top food too with pool table and a nice garden.
Ground Description
An athletics stadium always gives me a European ground feel and watching the beautiful game from a distance isn't popular. However the 12,000 capacity stadium has been the clubs' home since 1972. It was built in 1955 and hosts not only Gateshead FC but also Gateshead Thunder RFC. The main Tyne and Wear stand is the only one of four areas normally open on matchdays and an area in the north west corner is given up to visitors. It has room for over 3,000. If the visiting club brings more than 1,200 fans they are then housed in the East Stand opposite which is fully covered. The main stand rake is very steep and a famous story from 1983 involves long time supporter Keith Morris (how are you doing fella?) who while over zealously celebrating, after Steve Mahoney had scored, tumbled down the steps head over heels at an alarming rate – I believe he was a tee totaler too!

Previous Meetings and Memories
Our record at Gateshead is impeccable, five wins from five, including a 2-1 win last season thanks to Keanu Marsh-Brown and Jake Hyde. The best ever win was 5-1 cruise in September 1986. I mention the 1983 visit above because it become legendary for two reasons – the aforementioned Mr Morris and the following story from the great John Margerrison:
“The squad stayed in Newcastle overnight and when we got to the hotel Barry Fry jovially said something like ‘you can go out and have a drink but make sure you are all in bed by 3am!’ So we went out and had a serious jolly till about 3am. At half time we were losing 2-0 and all playing like you know what. Barry blew a gasket and went crazy shouting at everybody calling us all the names and nearly coming to blows, tea tray going everywhere. We went out second half and scored 3 to win the game with me scoring the first then Steve Mahoney and Stewart Atkins. Team talks were always fun and he used to say ‘right Brownie you do this, God you do this, Steiny do this’ then he would look at me and say ‘you just do what you want Marge’”

Celebrity Watch
Gold medal paralympian Josef Craig is probably their current most famous fan but it seems football and very little else in the way of other sports is represented by persons from Gateshead : Lawrie McMenemy (whose brother was my postman when living in North Finchley), Andy Carroll, Paul Gascoigne, Norman Hunter and Chris Waddle amongst others. Brian Johnson, front man of ACDC, was once offered the job of tannoy announcer at the Stadium – allegedly!
Thanks to Messrs McInness and Goodwin from Gateshead for their help with this guide.
Posted by Reckless on Sunday, October 12, 2014
Email ThisBlogThis!Share to TwitterShare to FacebookShare to Pinterest
Labels: Away Guides, Gateshead