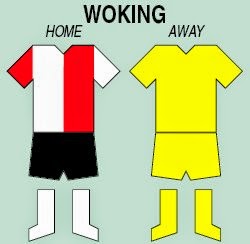 Brief Directions by Road:
Not an easy one this. From the M25 come off at Chertsey Junction 11, and at the top of the slip road turn right, following the signs for A320 Woking and Guildford. Basically stay on this A320 road which is regularly signposted Guildford and eventually you will reach the ground. The real secret in finding Kingfield was always to follow signs to the Woking Leisure centre which is opposite the ground.

Car Parking:
Options are either street parking or for ease at the leisure centre. Park near the entrance/exit if you can it will save some time getting home, trust me.

Directions by Train:
Trains from London Waterloo which will take approx. 40 minutes and go directly to Woking Station. Woking train station is in the Centre of town approximately a mile and a half from the ground and about 30 minutes brisk walk. Stuff that, its a cab journey Reckless, made for sharing and leaves time for an extra beer!

SUPPORTERS COACH:
The supporters Coach will leave the Hive at 12.00 midday with earlier pick up points at Potters Bar Station. Barnet (3 separate places), Whetstone and Edgware starting at 11.00 am. The price is £20.00 return.
For further information please call the ticket office on 020 8381 3800 and select Option 2


Eating and Drinking Locally:
The nearest pub to the ground is the the Kingfield Arms. It is located about 500 yards from the ground on Kingfield Road. My choice would be the 'The Sovereigns' which is an Ember Inn on the Guildford Road (A320) purely because one of my spies told me about the awesome Ultimate Mixed Grill on offer for about £11.00 - rump steak, gammon steak, a whole chicken breast, two pork, leek and bacon sausages,two fried eggs, chips, a grilled flat mushroom, onion rings, garden peas and half a grilled tomato. He is a big lad believe me and struggled to finish it! The catering inside Kingfield was always decent and according to my spies is still as good.
Another option of course is the Woking Snooker Centre which is adjacent to the ground. Well behaved away fans have always been made welcome and I have used it on many occasions – nice people they are too.

Social Club:
Away fans were not permitted in The Cardinals Bar last year because of segregation but if you fancy a blag then it can be found behind the main stand.

Ground Description:
Kingfield's main stand or actually stands, as it is split into two, have been around for some 50 years and occupy half of one touchline. Open terracing is to be found either side. To the left is the home end or Kingfield Terrace. Opposite is the uncovered Chris Lane terrace which is allocated to away fans. Woking’s pride and joy can be seen to the right. The Leslie Gosden stand was built in 1995 and towers over the rest of the ground. It offers a superb view of proceedings although you will be open to the elements if you sit at the very far ends.
Admission Prices:
Adults £15 Concessions £10 Under 16's £5

Previous Meetings and Memories:
Our last meeting was in October 2013 (actually on my 30th wedding anniversary) and Barnet's loyal bunch of travellers were blessed with a 0-0 draw in front of around 1,400.

A Barnet match against Woking over the years has usually been exciting, but not normally rewarding. A George Cleary last minute penalty in front of a massed North Terrace got the Bees a reply in the FA Cup, in 1978 (what a great goal celebration that was). 3-3 the final score but we would have won at Underhill that day if it hadn’t been for Jimmy Greaves getting himself a red card! The replay also finished 3-3 at Kingfield but the Cards gave us a lesson in finishing at Brentford’s Griffin Park 3-0 in the 3rd game.


After two further fantastic FA Cup draws at Underhill 4-4 and 2-2 in successive seasons (1994 and 1995) the Bees lost both replays at Kingfield.

Celebrity Watch:
Woking is famous for producing the creme de la creme of the British pop music scene. Paul Weller of the Jam, Petula Clark of ‘Downtown’ fame, the songwriter of that song and the ‘Neighbours’ theme tune Tony Hatch, Les Reed composer of ‘The Last Waltz’, Rick Parfitt of Status Quo and the band Badfinger who were discovered by The Beatles, to name most of them!
Literature is also well represented in the history of Woking as both George Bernard Shaw and HG Wells resided there at some time.
The first ever Mosque to appear in Britain was built in Woking in 1889 as was the first ever Crematorium in Britain in 1884. Whilst the West Woking Working Mens Club was closed in 1960 as the local council felt the name was too difficult to pronounce!
Posted by Reckless on Saturday, November 15, 2014
Email ThisBlogThis!Share to TwitterShare to FacebookShare to Pinterest
Labels: Away Guides, Woking