Key Personnel
Darren Ferguson was appointed Manager at Doncaster in October 2015
He had previous experience at Preston North End and Peterborough Utd. As a player he played under his Father at Manchester United, the Wolverhampton Wanderers, Sparta Rotterdam, Wrexham and Peterborough before retiring from playing in 2008. 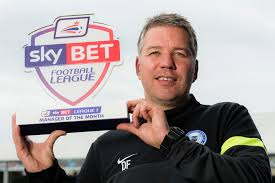 Brief Directions by Road
The M18 is accessible from the A1 (M) Junction 35 or the MI Junction 32. Leave the M18 at its Junction 3 and pick up the A6182 (Doncaster) The ground is very well signposted and only a couple of miles away from this point. At the Lakeside Pub turn left into White Rose way. To your right is the Lakeside Shopping Centre and the ground is directly behind this. Turn right into the Industrial Area to find the Keepmoat.

Car Parking
The stadium has room for 1,000 cars if you arrive early enough, the cost is £5.00. Beware the time delay in exiting the car parks after the game.
Alternatively, a number of firms on the nearby industrial park, offer matchday parking at around £3.00-£4.00 per vehicle.

Directions by Train
Doncaster station is direct from Kings Cross and a mid-morning train should take under 2 hours. The ground is best served by taxi as a 30 minute walk awaits

Eating and Drinking Locally
The Cask Corner on Cleveland Street is the best bet near to the station with a great range of beers I am told although they do not serve food. Around the ground there is a Beefeater Outlet and a bar at the Bowling Alley but that's about it. The Social club does allow visiting supporters but again no food on offer until inside when the normal football fayre of burgers, pies and chips sometimes smell rather inviting. Best for last and worth a little detour pre match if you can. Whitby's The Old Fire Station, Leicester Ave, Doncaster DN2 6DR – Sit down Fish and Chips at its best, my dear departed friend Donny Gaz's second home, he always raved about it.

Ground Description
The old Belle Vue ground was like watching football in the 1960's the ground had hardly changed. Big terraces and a creaking old main stand. This stadium with its capacity of just over 15,000 opened in 2007 and what we can call extremely efficient for watching football without much character, but that is the way with so many stadiums in this 21st Century. The West Stand contains the tunnel and dressing rooms opposite is the Doncaster success Stand which has executive boxes while both end are identical with the North end allocated to visitors


Previous Meetings and Memories
Our best visits to Doncaster (at the old ground) were in a Division 3 game in 1998 when Mike Basham and Scott McGleish scored in a 2-0 win and in the conference Season 2001 we came home with 3 points in a 3-2 win, goals from Lee Flynn (2) and Wayne Purser. This is our first visit to the Keepmoat Stadium.

Celebrity Watch
Doncaster’s list of famous residents and ex residents is as impressive and as varied as anywhere in Britain.
World War 2 flying hero Douglas Barder, who had both legs amputated yet still made it back to the NAAFI for Egg Bacon and lashings of ginger beer, was born in Doncaster. The groin tingling 1960’s leather clad actress Dame Diana Rigg who could have ‘Avenged’ me anytime but ended up a Mrs James Bond was also from these parts. The big voiced acting beard of Brian Blessed, the syrupy singing of Lesley Garrett, the voice of Marilion Steve ‘H’ Hogarth,

Posted by Reckless on Wednesday, October 05, 2016
Email ThisBlogThis!Share to TwitterShare to FacebookShare to Pinterest