Key Personnel
Steve Evans is the current gaffer at Mansfield and has been since November 2016. A Glaswegian, Evans had a short playing career with Albion Rovers, Clyde and Ayr United amongst others cruelly ended by a knee injury when aged just 24. He managed at Non League Stamford, Boston United and of course Crawley Town whom he guided into the Football League in 2011. He then had spells at Rotherham United and Leeds United. 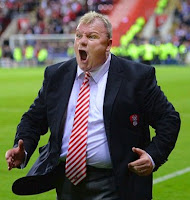 Brief Directions by Road
A straightforward route for this one. Exit the M1 at its junction 28 and follow the A38 signposted Sutton in Ashfield and Mansfield. Basically just stay on this A38 road (it is named Sutton Road), turning right at a crossroads at one point, until you meet the Sir John Cockle pub on your left at another crossroads. Do not be put off by the inordinate amount of traffic lights you encounter en route, be patient! Turn right into Sheepbridge Lane (ground signposted at this point). Pass under the railway line and look out for a left turn into Quarry Lane with the Lord Byron pub beckoning you! The ground is a short drive/walk down this road.

Car Parking
There is a car park at the ground for approx. 300 cars which charges I believe £5.00 per car but this gets full very early. There are numerous pay and display parks locally the best being the Station Car Park but this is limited to 4 hours.
I am asked to warn you that the retail park beside the ground does not allow football parking and you are likely to be clamped!

Directions by Train
A journey of around two and half hours from Kings Cross St Pancras will possibly incorporate a change at Nottingham. The floodlights are clearly visible when you leave the station and the ground is a ten-minute walk away.

Eating and Drinking Locally
The Famous Talbot is about 50 yards past the ground and is away fan friendly and also serves food. The Bold Forester on the Sutton Road A38 is highly recommended personally but is a good 15 minutes walk away from the stadium. It was the site of my 45th birthday celebration, Well I think it was anyway! I actually had more shots that day than the Barnet team. Unfortunately the ground is heavily infested by fast food take-a-ways all within a few minutes walk in the local retail parks. If you like a pie during t’match or at half time then you will not be disappointed inside the ground.
Club Quote: Away travel supporters are most welcome in the SSA supporter’s bar located at the bottom of the main stand. Sometimes there is a £1 guest charge as this is a members bar. Stag TV and a family friendly welcome awaits you. I read that as no problem! 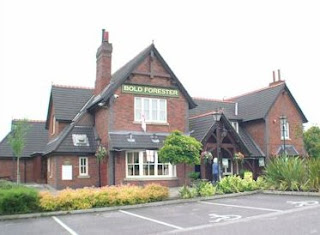 Ground Description
The ground has only retained one stand from the last century and that is the quaint Bishop Street Stand built in 1938 seating 600. Its design will be very familiar to the more senior supporters from our Southern League days as it resembles the original main stand at Plough Lane Wimbledon albeit on a slightly larger scale. Wealdstone‘s Lower Mead had another example of this design except that it sat on a raised base that held changing rooms and offices. It too will soon sadly be a relic. The two tiered Ian Greaves or West Stand was completed in 2001 replacing the fine old West Stand which from the pitch bore a similarity to the old East and West Stands at Highbury with a large open terrace in front - oh well another gem of a football stand has bitten the dust. This new structure has room for around 6,000. At either end the stands are identical (apart from the seat colouring) single tiered constructions with the away fans are housed in the North Stand which is to the left of the main stand - it holds 1,800. 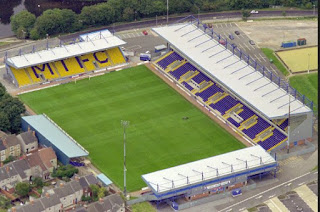 Previous Meetings and Memories
Our last visit was September 2016 when a John Akinde goal won it for the Bees.
I seem to recall that the 0-5 defeat at Field Mill in November 1998 in Division 3 was the first game I ever witnessed watching the then horrible new fangled yellow ball, but I might be wrong. A highly entertaining game at Underhill in August 2000 finished 3-3 featuring goals from Scott McGleish, Sam Stockley (now that was rare) and Mark Arber. Barnet’s first ever victory as a Football League club came at Field Mill in August 1991 Mark Carter and Gary Bull scored in a 2-1 win.


Celebrity Watch and Interesting Info
Mansfield is literally the furthest football ground from any section of English coastline!
If you spotted in years gone by a 60 plus old man in a leather cat suit it is probably 1970’s Glam Rock star Alvin Stardust - certain supporters I could mention remember him as Shane Fenton in the 1960’s. If a lady runs up to you with a microphone dressed in Khaki it could be TV reporter Kate Adie. Very attractive TV presenter Penny Smith hails from here as does that ex Blue Peter presenter who very stupidly prepared something earlier!!! - Richard Bacon.

Posted by Reckless on Sunday, January 28, 2018
Email ThisBlogThis!Share to TwitterShare to FacebookShare to Pinterest
Labels: Mansfield