Key Personnel
The current Manager is Oldham born ex striker Mark Robins, who had a 17 year playing career notably with Manchester United, Norwich City, Leicester City and Rotherham United. He has managed at Barnsley, Huddersfield, Rotherham and Scunthorpe before taking the reins at the Ricoh – for the second time – in March 2016 replacing Russell Slade. As a player Robins won 6 Under 21 England Caps plus FA Cup and Uefa Cup Winners medals while at Old Trafford. 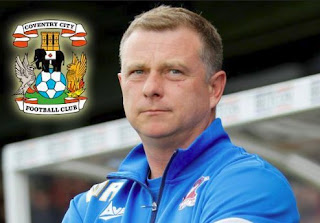 Brief Directions by Road
Really easy this one by car, M1 and onto M6 until its Junction 3 (A444). Head towards City Centre and you see the stadium on your left just after the first roundabout.

Car Parking
Most of the Parking at the stadium is permit although you can pre book a space for £10.00. www.glideparking.com/ricoh-arena
Limited numbers are available on the day although the club are in the throws of developing a relationship with local factory units. Details at the same website address.

Directions by Train
Always a favourite of mine and our slightly larger band of brothers choice of travel for this one – A fast train from London Euston will only take an hour but Coventry Station is 3 miles away and about £12.00 in a cab, made for sharing. Buses run from the station to the ground too. The Ricoh has its own station (Coventry Arena) but trains are infrequent surprisingly and only one or two carriages which are normally full to overflowing.

Eating and Drinking Locally
The Grosvenor Casino Bar at the ground is Ok and admits away fans but has a strict over 18 policy. Longford, an area about 15 minutes walk from the ground over the Coventry Canal has a few away friendly pubs including The Coach and Horses and The Longford Engine.
Near to the station The Earl of Mercia is the Wetherspoons outlet or how about The Squirrel for a decent pint or even better the Golden Cross which serves up a selection of home made pies with all the trimmings on their bar menu.

Ground Description
A 21st century area awaits with perfect viewing from all 32,000 spaces from a seat to rake issue. Distance to the far end viewing is another issue. 3 tall single tier stands a join the main stand which has a small tier of raised seats above its lower tier. We shall be allocated a section of the South Stand. There are large concourses with food and drink outlets. 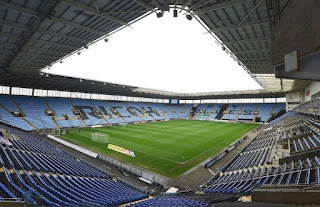 Admission Prices
All areas £25.00 Adults £20.00 Concessions
If tickets are bought in advance from Barnet FC Hive Ticket Office in person there is a three pound saving. Ticket office times can be found at
www.barnetfc.com/news/2018/february/tickets--coventry-city-away-details/

Previous Meetings and Memories
My memory goes back further than most but I cannot recall Barnet ever playing Coventry City although I am reliably informed by Mr John Erroll - memory extrodinare - that we met in a Pre Season Friendly in 1989 (Thank you John). I do have one memory of travelling to an away game in the very early 1980's on the players coach to, I seem to remember Northwich Victoria (Barry Fry allowed supporters to travel with the team for free in those days if there wasn't too many of us and you got to Underhill early enough). We stopped at a Service Station, probably Sandbach, and a mob of real moody looking Coventry fans followed us into the restaurant and challenged us to being Wolves and were we up for it?. When explained were were Barnet (from Underhill) they let us off – they must have heard about our legendary exploits all over the county mustn't they?

Celebrity Watch
Lady Godiva rode a horse in her birthday suit through Coventry in the 11th century to protest about taxation. Sports presenter Richard Keys would probably had shouted something rude at her had he been around in those days, but he comes from Coventry as does the late legendary radio broadcaster Brian Matthew.

Music is very well represented as Frank Ifield, Vince Hill, Pete Waterman, The Specials, The Selector and Hazel O'Connor all come from these parts.

Actors Billie Whitelaw, Nigel Hawthorn and Clive Owen originate from here too. The Penny Farthing bicycle was invented in Coventry by James Starley in 1871 in the Singers Factory. The original name of the club was Singers FC. Being Sent to Coventry (as imprisoned in Coventry prison and despised, ignored and not spoken to) was a anti-Parliamentarian punishment during the English Civil war. In the 20th century being sent to Southbury was a similar penalty but much worse.


Posted by Reckless on Sunday, March 04, 2018
Email ThisBlogThis!Share to TwitterShare to FacebookShare to Pinterest
Labels: Coventry