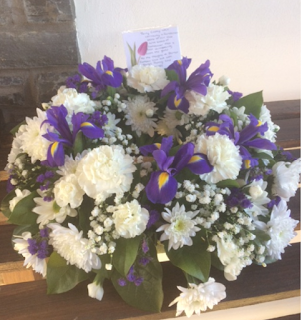 The flowers sent by Barnet FC

There are certain players who represent a football club who are foundation stones and when we reminisce they are the players who we refer to as “A great player”. Some are remembered more for a particular reason and Terry, much to his ever lasting credit, always introduced himself it seems, in Barnet circles anyway, as “I'm the guy who scored the own goal against Preston North End in the FA Cup” . Having contacted and spoken to supporters from that era, local press reporters and former team mates he certainly falls in the former category. A truly fine half back with Welsh Amateur caps and who captained an outstanding side, with outstanding individuals that were amongst the elite of the Amateur game.

Terry was born in Llanrwst North Wales in 1937 and attended Llanrwst Grammar School. He was awarded a trophy as the best all round sportsman in the school and played for local clubs Llandudno, Colwyn Bay and appeared for Nottingham Forest as a Youth. After his RAF National Service in 1958 he went to Loughborough University where he studied teaching and obviously starred for the First X1 Football team alongside another future Barnet hero, inside forward Tony Brimacombe and a very young Bob Wilson of future Arsenal and Scotland fame.

In the Summer of 1961 while combining his playing with teaching in Hatfield, the then manager of Barnet Wally Lines signed Terry. At that time a certain Tommy Docherty was learning a trade coaching at Underhill.
Terry made his Bees debut on 31st August of that year in a 5-1 Underhill win against Hornchurch. Barnet line up: Brian Goymer – Micky Cooper, Jeff Voyce - Terry Casey, Alf D'Arcy, Les Picking – Bill Belger, Denis D'arcy, Dave Harkness, Brian Figg and Reg Finch.

In his first two seasons Terry helped the club to two runners up positions in the Athenian League before taking over as Captain in 1963. Barnet then won successive League titles in 1963-64 and 1964-65.

Derek Scott a fervent supporter from that era whose Father was the Underhill Groundsman commented, “That half back line up of Picking, D'Arcy and Casey was a dream. Terry very quickly became my favourite player and even more so when the following season he introduced his 'mate' Tony Brimacombe to new Manager Dexter Adams. Tony was a class act as well. When Alf left for Enfield in came Dennis Roach at centre half, then Roger Figg arrived and the return of Tony Harding. It was an exciting team with some wonderful players. Dick Rolfe, another veteran supporter said, “We could play a conventional back five but then change so easily to a new style back four with Terry and Dennis as a brilliant centre back partnership, they were special times and we seemed unbeatable”.
Goalkeeper Johnny Barr who arrived in the Summer of 1964 recalled “It was really easy having that quality of defence in front of me and Terry commanded it. Terry was a gentleman but always the one, alongside if memory serves Reg Finch, who would be the players' representative when it came to liaising with the Board or the Manager.”

Goal machine Les Eason was just 20 when he joined the club in 1965, he confirmed “ Yes it was Terry that we younger players looked up too, he would look after us and advise us as far as contracts were concerned and the way the club was run generally but you put your full trust in him. If we all decided that the win bonus should increase Terry was the Man. It came so naturally to him to be the link between the players and the club officials I've said it so many times but it was really special to me to be joining such a dominant team and it took me a while to find my feet as they used to whip the ball around. No hoofing up the park to run on to like I had been used to but precise and measured quick passing through the midfield, marvellous. Those teams Terry captained were revered by other clubs.”
The game which featured that own goal that Terry had referred to and mentioned earlier in this piece was in January 1965 and the 3rd Round proper of the FA Cup. In the previous rounds Barnet had waltzed past the likes of Stevenage Town, Walthamstow Avenue and Cambridge Utd, all top clubs at the time. After a brutal 4-4 draw at Southbury Road Barnet overcame old adversaries Enfield at Underhill 3-0 in front of over 9,000 in what was according to eye witnesses one of the most one sided games ever seen at the dear old stadium. That win pitched the Bees against Second Division Preston North End, who in the previous season had been FA Cup runners-up loosing to West Ham 3-2 at Wembley. Underhill was crammed with nearly 11,000 spectators, 900 of them in the newly built Main stand. Barnet were 2-0 down inside 5 minutes but Barnet Press reports at the time record that Barnet drew level in the second half through Roger Figg - set up by Terry Casey - and Don Whyte who latched onto the perfect pass again from a certain Terry Casey. The Barnet Press text penned by reporter Jonathan Lang now takes over - “With five minutes left on the watch Preston poured down the slope, got clear on the right and the telling cross was met not by a man in white but poor Terry Casey, The Welsh internationals' attempted clearance arrowed into his own net past a helpless Johnny Barr, 3-2 the defeat and a mortal thrust to the hearts of the brave Lions from Barnet”:

Terry was selected for the Great Britain Olympic Football squad preparing for the 1964 games in Tokyo and won 10 Welsh Amateur Caps, captaining his country against England. He toured Africa with the Middlesex Wanderers in the Summer of 1965 visiting Kenya, Rhodesia, Zambia and Uganda.

Terry's final 1st team game for Barnet was in May 1966 in a 1-1 draw at Merthyr Tydfil in his home Country, the proud Welshman he was. The line up:
Johnny Barr – Roger Quinton, Jeff Voyce – Terry Casey, Dennis Roach, Barrie King – Don Whyte, Les Eason, Tony Harding, Roger Figg and Reg Finch
He played in a handful of Eastern Floodlight League Reserve games for the club in 1967 and for short time was assistant Manager to Dexter Adams.

After his playing days Terry was appointed North West Director of Coaching by the Football Association and after a successful period with the FA joined the Welsh FA as Director of Coaching and development. His work was then recognised by FIFA who appointed him as Technical Director which resulted in him visiting many countries throughout the world. He attended numerous European and World Cup matches representing FIFA as Technical Match Assessor. To obtain that sort of respect from within the game is simply wonderful.

After retiring Terry moved to Llanwit Major in South Wales where Golf took up a lot of his spare time. He achieved a single figure handicap and of course was a very popular member of his beloved Southerndown Golf Course with whom in later years he toured in Ireland and France.

Hearing from his neighbour and friend Colm O'Shea, who has been so very kind in helping me pen this tribute Colm said, “Terry especially loved to reminisce about his playing days with Barnet and always his biggest regret was that own goal!.He attended a Barnet players reunion only a couple of years ago. He was a modest man, a dear friend and liked by all who met him.”
Terry passed away on 19th of February and is survived by his Daughter Rebecca. His funeral will take place at 11.00am Tuesday 13th March at the Cardiff and Glamorgan Cemetery.

It appears that Terry accumulated a huge amount of memorabilia over the years many artefacts from his playing days at Underhill. Terry made 138 first team appearances scoring 6 goals between 1961 and 1966.
I am sure that all Barnet fans will wish his family and friends well at this very sad time as another of the special Barnet Football Club family has departed. Terry Casey was certainly a foundation stone of our club and a breed of footballer that is fast disappearing from the game.

Posted by Reckless on Friday, March 02, 2018
Email ThisBlogThis!Share to TwitterShare to FacebookShare to Pinterest
Labels: Casey