Next a central defender who is still to this day the most expensive player ever purchased by the club. He spent nearly six years at Underhill and captained the side to two play off semi finals


Gregory Heald was born in Enfield on 26th September 1971 and started his career aged 11 at Leyton Orient and representing England Schoolboys before joining Norwich City as a apprentice in 1988 featuring in their youth side.
He joined Enfield in 1993 and spent a season at Southbury Road and helped the club to narrowly miss out on promotion to the Conference from the Diadora Premier League.
John Still, then manager at Peterborough, snapped up his signature for £35,000 where Greg, partnering another future Bee in Gary Breen, featured in over 100 games scoring 6 goals. 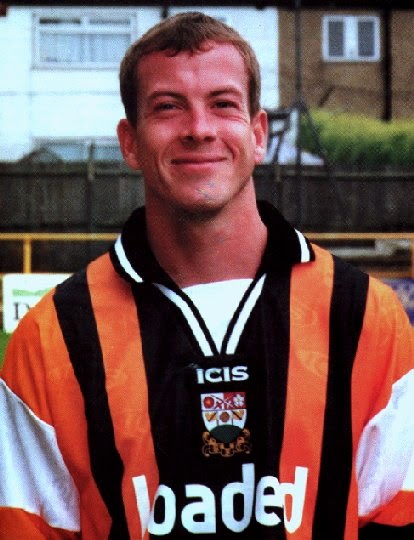 In August 1997 with Still now in charge at Underhill Heald put pen to paper to sign for Barnet and the transfer fee of £130,00 is still a club record.
It was for a rather auspicious occasion that Greg made his Bees debut at his former club Norwich City in the League Cup 1st round 1st leg on Tuesday 12th August 1997. Barnet lost the game 2-1 but won an exciting return at Underhill winning 3-1 on the night (4-3 on aggregate) coming from a goal down at half time. Greg scored the first before two goal Sean Devine intervened! The line up at Carrow Road that evening in front of 5,429 was:
Lee Harrison, Sammy Stockley, Greg Heald, Jon Ford, Lee Howarth, Michael Harle, Warren Goodhind, Billy Manuel, Danny Mills, Sean Devine and Kenny Charlery. Subs: David McDonald, Paul Wilson and Dean Samuels.
Forming a central defence threesome with Ford and Howarth, which was a trusted formula for Still, in the next round the Bees drew Middlesbrough. At the Riverside Stadium Greg had, in my opinion, one of his greatest games for Barnet. He superbly marshalled a defence that was very unfortunate to concede a solitary goal. “Lee Harrison in goal was fantastic that night and we were all so tight. In the return at Barnet we held on for 45 minutes but lost 2-0. They were a very good side with Emerson, Paul Merson, Andy Townsend and Mikkel Beck who I was marking” said Greg.

Making 50 appearances and scoring five goals, Greg captained the team to a seventh placed finish in Division Three that season and on a ferocious afternoon at Underhill in the first leg of the play-off semi against Colchester United he scored the only goal in a 1-0 Barnet win. “We should have finished them off there and then but they were a very physical side.” The infamous second leg at layer Road still wrangles with Bees fans because of a last minute penalty appeal which, had it been awarded and we had scored, Barnet would have been at Wembley. “It was a poor decision by Mr Heilbron” says Greg “It was a stone wall penalty and not obstruction on Dean Samuels and at 3-2 on aggregate at that point we could have won it on away goals. We deserved more because we were down to 10 men after an hour as I lost my defensive partner Lee Howarth who was sent off ”.

Missing the first half of the following season due to an ankle and then a back injury making only 19 first team appearances (2 goals), Greg returned to the side in the New Year of 1999 at home to Shrewsbury Town. “Mark Arber and Mike Basham had joined the club and we became the defensive three”. The Bees finished a disappointing 16th in the league but found their feet again the following season with another play-off semi final against another of his old clubs in Peterborough United. Barnet were frankly outplayed in the two legs loosing on aggregate 5-1. Greg had featured in 46 games scoring five times.

The 2000-1 season was of course our relegation season back to the Conference and Greg agrees with most that with a side full of such good players it still amazes him that the club struggled. “I had formed a very solid understanding with Mark Arber by then.” In the final “loser loses all” game at Underhill against Torquay, in which Greg scored incidentally, the match was interrupted in the second half by two male streakers. Greg is rather famously captured on film (see picture) lashing out at the trespassers. “I lost it for sure with the idiots, I still believed we could get back in the game and concentration could have been lost”. Many players I have spoken to since then have admitted that Greg did rather have a small temper on him! Heald make 45 appearances that season again scoring five times.

In 2001-2 Barnet finished 5th in their first season back in the Conference - Greg featuring 44 times scoring twice.  “That was hard graft, some of the grounds and pitches we had to play on were very difficult, many League standard players struggled ” he said. In April 2002, he was selected for the England non-league international side to play Holland at Yeovil's New Huish with team mate Mark Gower.

His final season at Underhill saw the club finish a disappointing 11th but it was the first of two rebuilding sessions at the club that culminated in the Championship win in 2004-5.
On March 27th 2003 (Transfer Deadline Day), Barnet sold Heald and team mate Wayne Purser to Leyton Orient for a joint fee of £18,000. Not the greatest return financially for the club but they had certainly got value for money with Heald's 100% plus input during his six year stay. He had made a further 28 appearances scoring four goals
Greg's final game in Black and Amber was at home to Hereford United on Saturday March 22nd 2003. The following line up won 2-1 with goals from Neil Midgley and Junior Agogo in front of 1,588:
Danny Naisbitt, Craig Pope, Greg Heald, Lee Pluck, Lee Flynn, Guy Butters, Mark Gower, Keith Rowland, Fraser Toms, Wayne Purser and Neil Midgley. Subs: Junior Agogo, Matt Langston, Chris Cashman, Lette Baimass-Jellow and Ricky Millard. 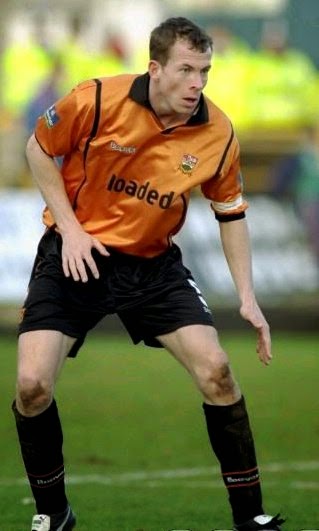 Greg was unable to secure a regular first team place at Orient, and in March 2004 he was released from his contract to join Rochdale. After a year at Spotland Greg briefly joined York City, “I was there two days I think” laughs Greg, then Burton Albion but soon moved on again to Ashton United in the Unibond Premier. “ I went part time for a short while”.

Moving back south Greg joined Aldershot for a season before he started to study hard for his degree in Sports Science and prepare for life after football as a teacher “ I have a wife and young family to consider now”. To support this he had a spell as a Fire Officer based at Potters Bar Fire Station while turning out part time for Thurrock before a year later accepting the position of Youth Team Coach at Adams Park Wycombe for a while. “I loved it but it was full hands on 7 days a week”
Entering full time teaching at Latimar School in Enfield he still couldn't resist one last fling with the game and briefly joined Enfield Town at the age of 37. Greg is today a PE teacher and Head of Year at a school in Harpendon.

Greg Heald is another player that our club was fortunate to witness not only from a playing point of view but from a “supporters player” point of view too. Always approachable with an infectious sense of humour he still follows our fixtures and was a fairly low key regular visitor to Underhill in its final years. He should be welcomed any time with open arms at the Hive and who knows he might just offer to pull the jersey on again even at 42.