The next in the spotlight is a player who put back bone into the team and who played in almost every position during his twelve years at the club. He also proved the myth that you can have blood the colour of your club.


Who was the hardest player ever to grace the Underhill pitch? – well there are a few candidates but an odds on favourite is without doubt “Wilse”. He will always be remembered for the crunching tackles, the bravest header, the herculean attitude and also for the loyalty shown to our football club.

Paul Wilson was born in Forest Gate in 1964 and joined West Ham United as a youth playing alongside the likes of Alan Dickens and Tony Cottee but was plying his trade for Isthmian League Barking by April 1988 when Barry Fry came a calling. 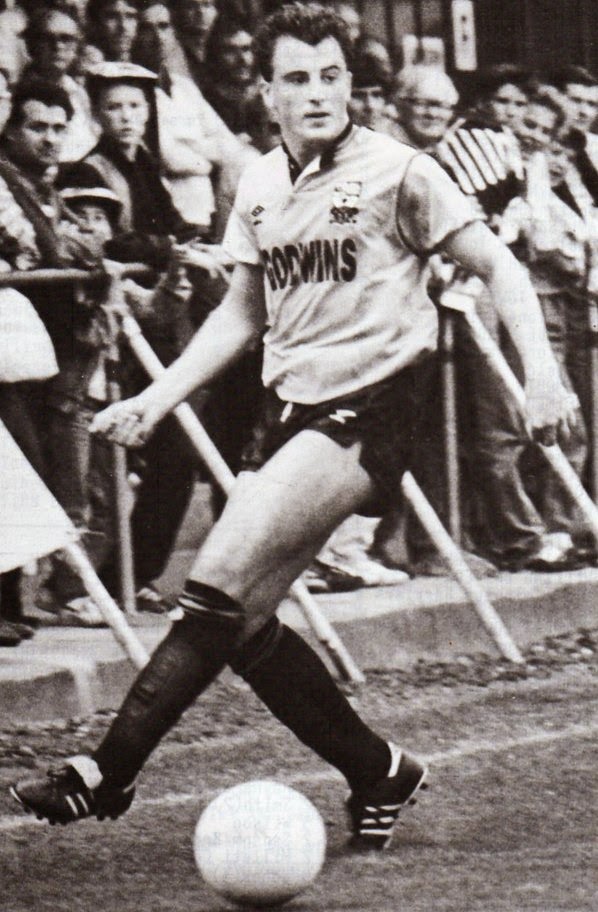 Over the next three seasons “Wilse” established himself as first team regular in what in those days of the GM Vauxhall Conference were very large playing squads at Barnet. He was ever present in League and Cup games in 1989-90 when the club finished 2nd to Darlington. The following season Paul made another 40 appearances culminating in being in the team that finally won promotion to the Football League in May 1991 at Fisher Athletic. To this day he still grins broadly when asked about that afternoon “What a day!”

It was during the next spell of his Bees career that he really cemented his legendary status. He stayed on after the administration problems of 1993/94 leading from the front, either the lynch pin in the centre of midfield or at right full back, always going the little bit further. Although arguably past his best as a player, in a Bees midfield alongside Darren Currie, John Doolan and Phil Simpson supplying Scott McGleish and Sean Devine, it is still hard to imagine now how little success that era bore. Paul's cavalier attitude will always endear a player to a home crowd and he was no exception. At away games he never failed to seek out our fans before and after games to thank them for their support. However when you met him, even though you knew he was a very gracious and loving family man he was always happy to chat over a beer – (sings) “We got Pa-ul Wilson, he drinks Holsten Pils-son” - you still had an almost one step back respect for him. Fear? Well maybe! He was rewarded for his exceptional service to the club with a testimonial game against his beloved West Ham United in October 1999. Then West Ham boss Harry Redknapp sent a full strength Hammers side to Underhill, including the likes of Paolo Di Canio, Frank Lampard, Michael Carrick, Rio Ferdinand and Trevor Sinclair.

Following a period of injury Paul had a month loan spell at Aldershot. A year later, finding himself only on the fringes of the first team manager John Still allowed him a loan spell at Boston United in September 2000 where he obviously felt happy as he joined the York Streeters permanently a month later to join team mate Ken Charlery.
Paul last game in a Bees shirt was as a sub in the second leg of the Play-off semi Final at London Road Peterborough when the Bees lost 3-0 and 5-1 on aggregate. The Barnet line up that evening;
Lee Harrison – Sam Stockley, Greg Heald, Mark Arber, Mike Basham – John Doolan, Darren Currie, Danny Brown, Fraser Toms – Scott McGleish, Ken Charlery. Subs Paul Wilson, Bert Bossu, Warren Goodhind, Marlon King and Rob Sawyers.

He was soon back at Underhill after retiring, this time as a coach. First under John Still and then for a time with Paul Shreeves and Martin Allen, before leaving before the start of the 2003/4 season.

Paul has sadly become a little reclusive as regards football and Barnet FC since these times which is a shame as should he walk back into the Pav or the Durham or whatever the new bar will be called at the Hive I know that literally everybody would want to welcome him back and a have a Larger, larger larger Wilson as we used to say but still keeping a little bit of distance between the great man and oneself - purely out of respect you understand.