Next a player who was recognised as a Player of the Year in 1985 not for scoring goals or saving penalties but for sheer 100% input and a big grin!


Peter Ronald Brown was born In September 1961 in Hemel Hempstead and his break in football was down to his Father. “When I was still at school my Dad wrote to Chelsea requesting a trial. Ken Shellito took me on and I signed as an apprentice in 1977” says Peter.“ 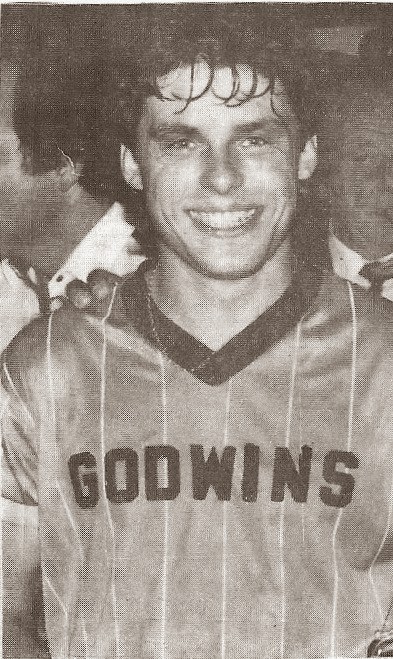 I supported them as a boy and its where I first met Mike Pittaway who went on to play for Barnet too. I didn't make the first team but Dario Grady was a coach at Chelsea and when he became Manager at Wimbledon he took me there.” Brown played in over 50 first team games at Plough Lane before a brief spell in New Zealand with Napier City. “Things started to change at Wimbledon when Dave Bassett took over as it normally does with a new Manager and I spent 6 months in Hawkes Bay which was fantastic but I came back home to join Tring Athletic. Very soon Barry Fry came in for me which allowed me to work for my Dad as an engineer and still play football at a good level”.


Brown made his debut for Barnet on 11th December 1982 in a 2-1 win at Dagenham in the following line up: Lewin - M Pittaway, Sargent, Millett, Bennett - Brown, Webster Stein - Westwood, Atkins and Barnes. Sub Ragan

“Brownie” spent the next six years at Underhill in a team nurtured by Fry that took the Vauxhall Conference by storm in the mid 1980's. Performing at right back or centre midfield alongside some of the best loved players who graced the Underhill turf, the era was a special time to follow the club which was overflowing with larger than life characters and risqué stories. It also presented some of the best football too – at least from an entertainment angle. “The camaraderie at Barnet was second to none. I already knew “Pitts” from Chelsea and John Docker from Wimbledon. I became very close friends with Edwin Stein and Nicky Evans – my wife Cath and I are God Parents to Nicky's daughter”

Peter's debut was on 11th December 1982 away at Dagenham. The following Barnet line up won 2-1 with goals from Danny Westwood and a very rare effort from Kevin Millett.
Gary Lewin, Mike Pittaway, Kevin Millett, Tony Bennett, Simon Webster, Gary Sargent, Edwin Stein, Peter Brown, Stewart Atkins, Danny Westwood and Colin Barnes. Sub: Steve Ragan.
“There are some infamous names there not least Steve Ragan who got a game at Yeovil abandoned when he collided with the goal post and the post lost! Gary Lewin has gone onto much greater things at Arsenal.” 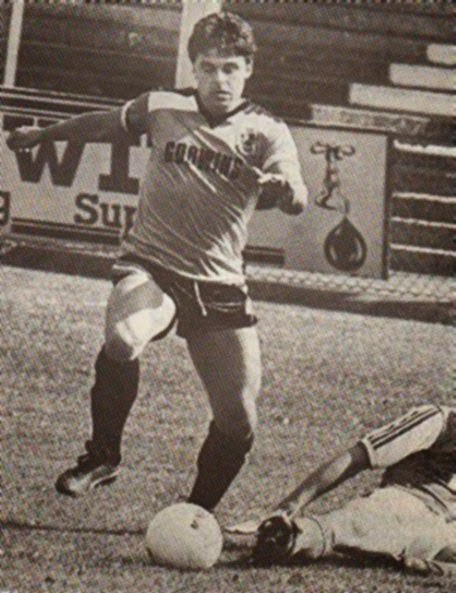 I asked him for some memories from the time - “Playing in that team was incredible. We were beating Trowbridge 10-0 and then Wealdstone 7-0 at Underhill one minute but then we would lose 7-0 to Enfield in the FA Cup which is a horrible memory, we were thrashed that day but we responded by winning the Herts Senior Cup and making the final of the League Cup”. We played some of the best football ever seen at that level with the likes Eddie Stein, John Margerrison, Noel Ashford and Robert Codner in midfield with Nicky Evans, Keith Alexander and David Sansom in attack. Gary Abbott was another really good player. The defence of Glyn Creaser, Steve Cox, Kirk Stephens and Kevin Millett was watertight, normally!” laughed Brownie. “We were all close mates off the field too and spent a lot of time socialising together which doesn't happen at many clubs, believe me”.
Peter was rightfully presented with the Player of the Year 1984/5 for his outstanding contribution to the era.

He tells a great story - “Typical Barnet, we played away at Bangor and were warming up on the pitch. Johnny Marge was quietly exercising on his own as usual - he stayed well away from physical contact of any kind, he could never get his head around us going in hard tackling him in training because that wasn't his style - when all of a sudden the kit man Dave Whitbread smashed one of those old black diamond balls which were hard as a rock straight in Marge's face. Marge nearly missed the game with concussion and Barry went absolutely ballistic! Only at Barnet.”

“Although Stan Flashman had saved the club by coming in it was obvious that he could see a lot of financial potential in the players. The old team had started to break up and players were moving on for decent fees. The offer I got from Chesham United was very good so accepted it. Did I regret going? On reflection yeah certainly but if I had known what was around the corner for Barnet I would have stayed but you make a decision at the time.”
Brownie spent two seasons at Chesham before representing among others St Albans, Edgware Town, Dunstable and Berkhampstead.

“I then drifted away from football enjoying the family and went into business plastering and decorating”. Peter has been married to Cath for 29 years and has two children, Oli and Hannah..

“Our dream was to own a pub and we did for a couple of years, The Black Horse in Tring, but it was very hands on running a bar and a restaurant and we sold up after a couple of years and moved to Berkhampstead where we are now”.

I asked him if he missed football and he told me “I didn't for a number of years although maybe now as I am getting older I regret more not trying to stay in the game. Talking about old times and mates with you reminds me of the great fun I had as a player, especially at Barnet where I spent the majority of my playing career. It is a great little club and I have some fantastic memories”.

Peter promised to visit the Hive very soon - “It will be nice to see the new home perhaps with some of the old guys, can you organise it please Reckless?” I shall. 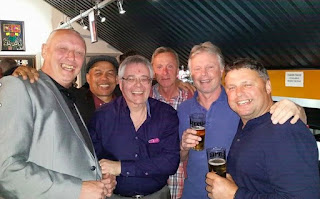 Well Peter got his wish with this reunion with Glyn Creaser, Edwin Stein, John Margerrison and Kevin Millett at "superfan" Steve Percy's retirement do at the Hive in May 2015