In the spotlight is a gentleman who spent a full 10 years as a respected player, captain and manager at Underhill clocking up close to 500 appearances and scoring over 30 goals, Edwin Stein.

Why, people have asked me, was the fencing so high behind the North Terrace? Legend has it that until Edwin Stein signed for the club in 1982 the fencing was half that size. He allegedly fired dozens of crosses, shots and corners into the gardens of Westcombe Drive and even to this day if a Barnet player miscues, the crowd still chant Oh Eddie Eddie, Eddie Stein - and most of the voices are too young to truly understand why they do it! In reality that was nonsense and the only bona fide legend in this tale is Edwin himself, essentially a very lithe, quick right winger with perfect balance and super fit.
Edwin was born in Cape Town, South Africa in 1955 one of 7 brothers and bought up in the Athlone district where his father, an activist in the Anti-Apartheid Movement, was imprisoned many times. The family eventually had to seek asylum and moved to England in 1968 settling in West London.

Edwin’s first clubs were North Paddington Boys and Kilburn Rovers in the West London Leagues “My brother Brian and I got the opportunity to go to Harrow Borough and then I moved onto Edgware Town and eventually onto Luton Town and then Dagenham where the Manager was Ted Hardy. Barry Fry had been chasing me for number of years, I knew that, so in due course I signed for Barnet for what was a big fee at the time (purportedly some £15,000) and it quickly dawned on me that I had made the right decision”.
Ed made his debut on 14th August 1982 at in a 1-0 defeat at Bangor City in the Alliance Premier League in the following line up;
Gary Lewin, Tony Bennett, Pat Kruse, Alan Garner, Mike Pittaway, Edwin Stein, Ronnie Howell, Gary Sargent, Steve Ragan, Stuart Atkins and Colin Barnes. Sub Peter Robinson.

Such was his flair; Ed was selected for the England non-league squad in 1984 and voted BFCSA Player of the Year in 1988/9. While at Barnet in the early 1980's Ed’s day job was as a plumber and I revealed to him that the Best Man at my wedding was his site manager at Wilmott Dixon Building Contractors and he had said that Eddie was absolutely the worse plumber he had ever employed. He kept him on purely for the company football 5-a-side tournaments. Edwin let out a hearty laugh and said “Reckless you know more about me that you should!” 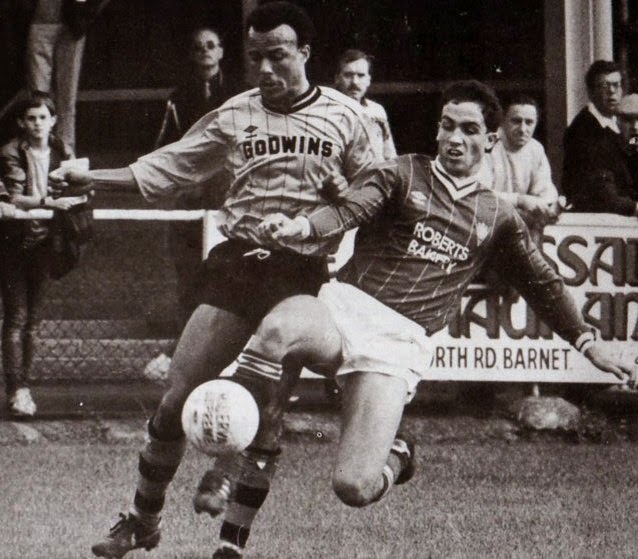 Ed revealed, and with justified pride, the Barnet games that really stood out for him - firstly the overwhelming of Boston Utd in the FA Trophy in 1987, the nail-biting Club Call Cup Final against Hyde Utd in 1989, the accomplished 3-1 victory at Wycombe Wanderers in 1991 and of course the promotion winning game at Fisher Athletic which all illustrated the ethos that Manager Barry Fry installed at the club and Ed has always attempted to imitate. “The team was adventurous to say the least what with at one time me on the right wing and the sensational Andy Clarke on the left, we terrorised teams. Dave Sansom, Nicky Evans, Frankie Murphy and Gary Bull were great players to play behind The penalty shoot out for the Club Call Cup at Telford's Ground was so nerve racking and some of the players lost their bottle but some of us were on a different level. I was not going to allow us to throw it away after coming back from 3-1 down. I just grabbed the ball and slotted it away. I remember being swamped by Barnet supporters on the pitch as I held up the trophy and loosing my shirt, fantastic memories. The match at Wycombe has thrilling and Gary Bull was electric that night, we were 2-0 up in 4 minutes and we completely outclassed them. Then there was the game at Fisher which was an incredible occasion to be involved with. I had been warming the bench that afternoon, but I kept onto Barry to ‘put me on Bazza, put me on’. When he did I set up that brilliant Bully goal; it was unbelievable but that side deserved it because we were just so good.

We then talked about the Football League days when Ed became assistant Manager to Fry. “It was a pleasure to be involved with that team because we took the league by storm. When you had a squad of that quality and depth it was easy! I briefly had the opportunity to play alongside my brother Brain again and was privileged enough to manage the club too when Barry moved to Southend Utd”. Ed was in charge when the club achieved promotion to Division 2 in 1993 and the first professional black manager.
“I thought long and hard about taking over but we were on the brink of another massive achievement and I wasn't going to let the club down, they had been good to me. After the mass exodus at the end of that season we got a lot of stick from supporters for a time and to some extent I understood their frustrations having such a brilliant team wiped away but the club went into financial turmoil, it happens sometimes in football believe me, it’s not nice but it happens. I know in my heart that team would have strolled the next stage of the league had they remained together, I am 100% sure we would have been successful, take that as some compensation. Football was my bread and butter at the time and I had to make a tough decision. I honestly would have stayed at Barnet forever if I could of because I love the club, but it was impossible”.
Ed followed Barry Fry to Southend as coach and then onto Birmingham City as assistant coach alongside Fry and long time friend David Howell. After leaving St Andrews Ed became a student at Brunel University in Uxbridge and after three and a half years got his degree in Sports Science and Psychology.

In 1998 Harrow Borough FC called Edwin and offered him the position of Manager. “I wasn't sure if I was making the right decision but I did feel as though I wanted to try and put my experience and new-found skills back into the game.
Edwin “retired” in 2003 from football and became a secondary school teacher but the call of the game became too much to ignore as Ed started his very own Soccer Academy based in Milton Keynes and completing the circle by becoming Manager of Southern League Premier Banbury United in September 2012 where he presides today.

Surprisingly Eddie has never kept any memorabilia from his football days, “Even my own three children don’t believe me when I tell them I played professional football”. Therefore I am currently organising some videos that he can transfer to DVD of the late 1980's. “That’ll be great Reckless, then I can prove to them all that I was quite good once”. “Quite good?” I replied, “mate, they should have been there!”
Posted by Reckless on Thursday, March 20, 2014
Email ThisBlogThis!Share to TwitterShare to FacebookShare to Pinterest
Labels: Players, Stein